The Sotomayor Nomination and Abortion

The Foundational Issue of Our Time

When a Celebrity Dies the Nation Mourns, But When… 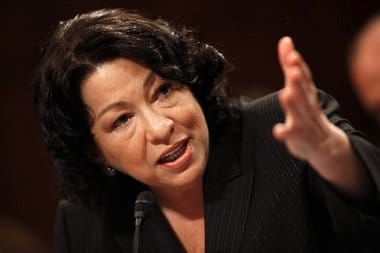 Speculation abounds over President Obama’s appointment of judge Sonya Sotomayor to the United States Supreme Court and her position on the issue of abortion. There currently is a very sensitive balance on the Court on some high profile social issues such as abortion, and many cases on these issues are decided by a vote of 5-4. Sotomayor, as a Supreme Court justice, will undoubtedly provide the deciding vote on a variety of such issues.

Judge Sonya Sotomayor, if confirmed by the U.S. Senate, is expected to vote with the liberal wing of the Court. Since her nomination replaces one of the most liberal justices — David Souter – the current balance on the Court is not expected to be disturbed by her confirmation. However, there has been some conjecture by activists in the prolife movement (and some anxiety expressed by pro-choice proponents) that Judge Sotomayor might vote with the prolife side on cases impacting abortion.

These suppositions are based upon three rulings of Judge Sotomayor that have been in favor of the prolife position. One such case upheld the constitutionality of the Mexico City policy, which prevents U.S. tax funds from going to international family planning organizations, i.e. Planned Parenthood, that promote abortion as a method of family planning.

At first glance Sotomayor’s rulings in these cases provide some hope that perhaps she might be the fifth vote to reverse Roe v. Wade, notwithstanding her clearly liberal view of the Constitution and the role of the judiciary. However, after reviewing the current public information about Judge Sotomayor’s record I am doubtful that she will be a vote in favor of life once she sits on the Court.

An assessment of Sotomayor’s position on abortion should first start with the political realities of her appointment. It is not likely that Obama would ever consider an appointment to the Supreme Court who did not share his far-left pro-abortion views. When campaigning for the presidency Obama made it very clear in a speech to Planned Parenthood that on the issue of abortion there would be no compromise on his part. He called such an issue fundamental and promised to sign into law the radical Freedom of Choice Act. Since taking office he has relentlessly pursued a pro-abortion agenda through his appointments to his cabinet as well as through his policy initiatives that include overturning of the Mexico City policy and moving to end conscience protections for healthcare professionals who oppose on moral grounds referring patients for abortion services. It is highly improbable with such a deep personal commitment to abortion that Obama would nominate to the Supreme Court a judge who did not share his beliefs. Further, the appointment of Sotomayor has not created concern among key Senators who have stated that a commitment from a judge to preserve abortion and Roe v. Wade is paramount to their favorable vote. After interviewing Judge Sotmayor several pro-abortion senators, including Diane Feinstein from California, announced that they are very comfortable with Sotomayor’s position on abortion.

A deeper examination of Sotomayor’s judicial philosophy indicates that she most likely will vote against the prolife position. She has stated that she believes that the federal judiciary correctly makes public policy as opposed to interpreting the Constitution. This, of course, is the exact judicial philosophy that brought us Roe v. Wade in the first place. Further, she has additionally made it known that she thinks factors such as gender and ethnicity should play a role in the decision making process of a judge, as opposed to an objective reading of the Constitution. Again, such superlatives are indicative that Sotomayor will make decisions not upon her reading and interpretation of the Constitution, but rather upon which party before the Court has her empathies and understanding. This manner of decision-making by a federal judge means that objective standards of judging and the clear meaning of the Constitution are trumped by political correctness and emotions. This is the exact judicial philosophy that birthed Roe and its constitutional sanction of abortion.

Judge Sotomayor past professional associations gives us additional clues that she will be a pro-abortion vote on the Court. From 1980 until October 1992 she served on the board of directors of the Puerto Rican Legal Defense and Education Fund. During this time the fund filed many friend of the court briefs in the Supreme Court in cases involving abortion, and such briefs were always in favor of expanding abortion rights. Sotomayor served during part of this period as chairman of the fund’s litigation committee and was fully aware of the briefs filed in the Supreme Court in these cases. The New York Times reported on May 28 about this fund that “[t]he board monitored all litigation undertaken by the fund’s lawyers, and a number of those lawyers said Ms. Sotomayor was an involved and ardent supporter of their various legal efforts.”

There is no question that the United States Senate will confirm Judge Sotomayor. The votes in favor of her confirmation exist. While her replacement of Justice Souter will not change the current balance on the Court, I have to conclude that on abortion Sonya Sotomayor will be a vote in continuation of abortion on demand.

Despite her certain confirmation prolife Senators must fight this nomination. The confirmation hearings must show Judge Sotomayor’s position on abortion and if, as expected, such information confirms our greatest fears then such testimony should be used to educate the public on the radical pro-abortion agenda of the Obama Administration.

We need some feistiness from prolife Senators on this one. Defeating the nomination of Sotomayor is going to be virtually impossible. But standing on principles and exposing the nature of the Obama agenda will reap great benefits in the future.

Copyright © 2009 by Thomas A. Glessner. All rights reserved.